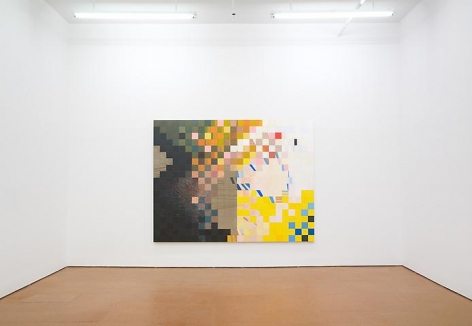 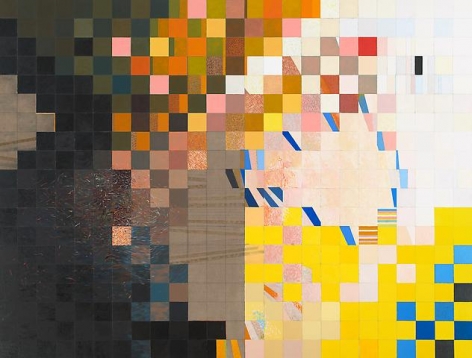 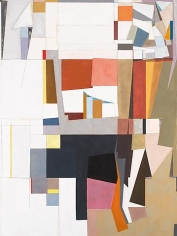 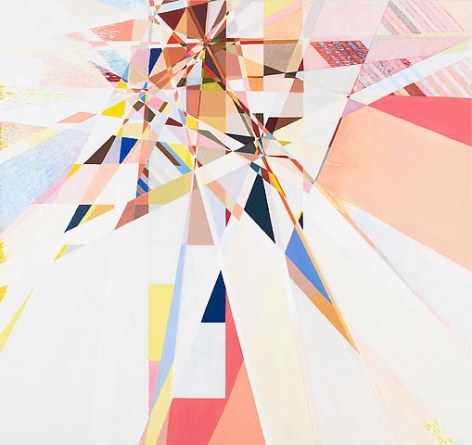 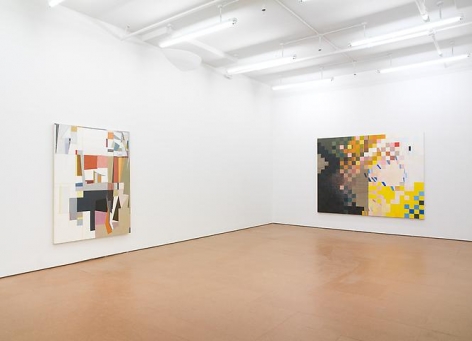 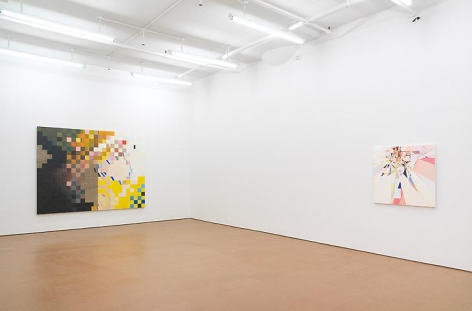 Alexander Gray Associates presented an exhibition of paintings by Los Angeles-based artist Jeremy GIlbert-Rolfe. In his second exhibition with the Gallery, the exhibition showcased three works, underscoring the artist’s deliberate and disciplined approach to painting.

Anchoring the exhibition was an early painting by Glbert-Rolfe, Some Difference (1986). This abstraction, with a loose composition of geometric forms in muted colors, anticipates a deconstructive architectural language. With its human scale, forms are broken and floated, squares and rectangles fold into each other; light and dark become foils for field and ground. The edges of the canvas echo a visual tension that is built in the central and tertiary spaces on the painting, causing the colors and shapes to simultaneously freeze and move.

Gilbert-Rolfe’s newest work, More (2010) has emerged after a year of experimentation. In this large-scale work, he embellishes and explodes a grid of squares; building axises and patterns. The surface of the painting combines colors in unexpected ways, contrasting darkness and light, brushstroke and mark, matte and sheen. Horizontal and vertical lines collapse into diagonal streaks, and harlequin forms push through a checkerboard framework. Of the painting, Gilbert-Rolfe writes, “Everywhere you look in More, something is happening. There is no ancillary detail, there is only detail. I think that means it’s intense without necessarily being dense. Fog can be dense and intense, but a flurry can be the opposite of dense but equally intense. More has both of those, plus plenty of others (plenty more).” Regarding his use of color and the structure of the grid, he comments, “...nearly every bit of the grid is different to every other bit. My paintings are held together to a great degree by color-combinations that reflect but don’t replicate the color-combinations that are nearby; or by color-combinations that relate to what’s around them by distracting from it, either through rearranging what they repeat or through opposition of one or more kind—through complementing, through tone, through being a different kind of movement.”

As a long-time educator, Gilbert-Rolfe is a champion of young artists, particularly painters. His engagement with such artists moves beyond the classroom or lecture hall; in 2010 he developed a collaborative studio practice with the Louisville, Kentucky-based painter Rebecca Norton. Their collaboration, under the moniker AwkwardX2, includes the work, Painting for New York (2010), included in the exhibition. Gilbert-Rolfe describes their dialogue, “It helps that we are both quite interested in anonymity, which, while not really possible for painters, we can get at least close to by dissolving whatever is distinctive about our individual method in one another’s, and by confusing the affine grid through which Rebecca generates her paintings, with the more conventional one that runs through mine.”