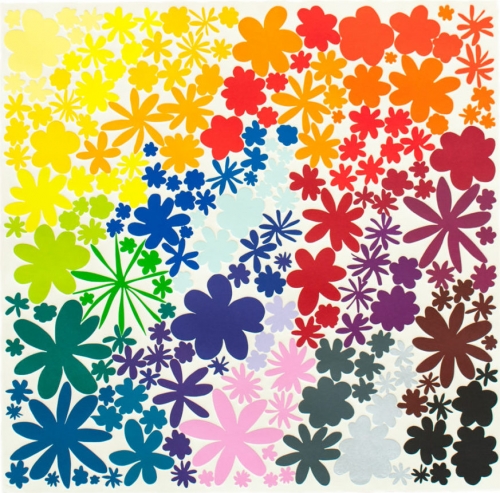 Polly Apfelbaum: Frequently the Woods are Pink, Prints from the Collections of Jordan D. Schnitzer and His Family Foundation features unique prints of extraordinary complexity from this renowned American artist. Apfelbaum creates worlds of visual wonderment. The artist’s maximalist aesthetic posits a startling idea: Beauty, exuberance, and chromatic energy are conduits to social unity. Her works convey a welcoming space where juxtaposition of seemingly incongruous colors and patterns find shared equilibrium hinting at a society in peace.

Marking the artist’s first survey exhibition dedicated solely to her ambitious printmaking practice, more than 60 works on paper have been selected between the years 2004 and 2018. The exhibition will highlight a wide-range of Apfelbaum’s printmaking methods with a collection of one-of-a-kind monoprints taking center stage. Her recent Atomic series arose from a process similar to that of her installation works, such as her “fallen paintings” consisting of many dyed fabric components the artist arranges in situ on the floor. Relatedly, these kaleidoscopic print works were created with assistants at Durham Press who inked hundreds of woodblocks in assorted colors and patterns. The artist then spontaneously placed the blocks in printing jigs to explore different color combinations and compositions. Created quickly, each monoprint serves as a kind of printed sketch, revealing unexpected moments of variation and fluidity.

Apfelbaum has been active since the mid-1980s and is best known for her expansive polychromatic floor-based installations residing somewhere between painting and sculpture. The artist has deployed a wide variety of media—including fabric, paint, dyes, wallpaper, and ceramics—materials traditionally associated with craft and domesticity. Influenced early in her career by artists Helen Frankenthaler, Morris Louis, and Jackson Pollock; Apfelbaum’s sensibility incorporates energy, playfulness, and wit, as well as her love of popular culture and affirmative view of femininity.

Apfelbaum has mounted nearly 60 solo exhibitions worldwide and has participated in hundreds of group exhibitions. Her work is in numerous permanent collections including the Albright-Knox Art Gallery, Buffalo, NY; Brooklyn Museum, New York; Carnegie Museum of Art, Pittsburgh; Dallas Museum of Art; Los Angeles County Museum of Art; Museum of Contemporary Art Chicago; The Museum of Modern of Art, New York; Pennsylvania Academy of Fine Arts, Philadelphia, PA; Philadelphia Museum of Art; Tang Teaching Museum, Saratoga Springs, NY; and Whitney Museum of American Art, New York. She was the recipient of a Pollock-Krasner Foundation Grant in 1987, a Guggenheim Fellowship in 1993, an Artist’s Fellowship from the New York Foundation for the Arts in 1995, an Anonymous Was a Woman Award in 1998, a Richard Diebenkorn Fellowship in 1999, a Joan Mitchell Fellowship in 1999, an Academy Award from the American Academy of Arts and Letters in 2002, the Rome Prize in 2012, and a Creative Capitol Award in 2019. The artist resides and works in New York City.