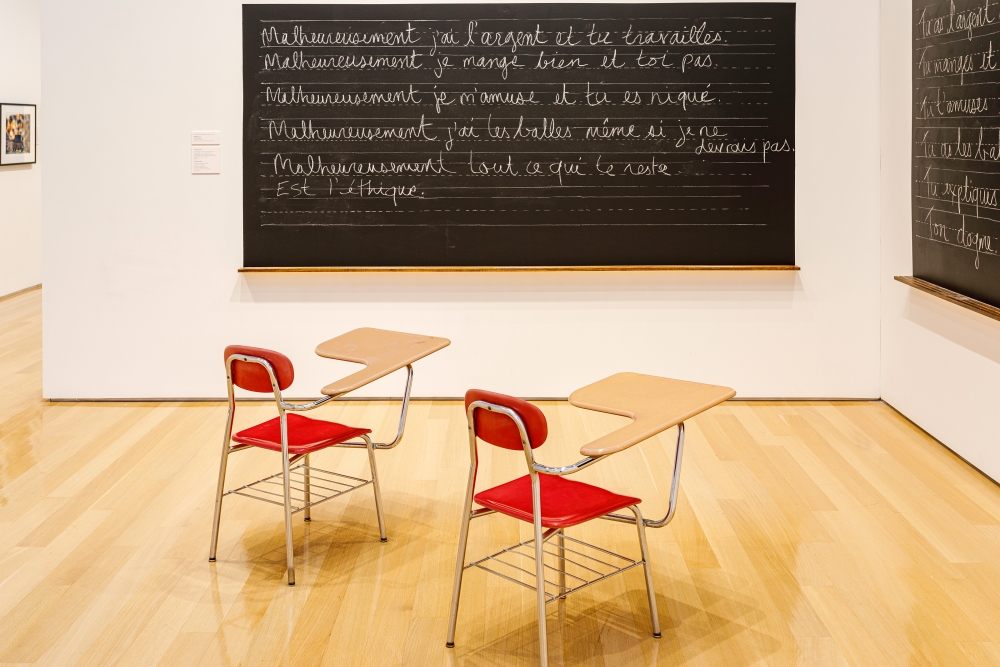 Luis Camnitzer's exhibition A Museum is a School at Gund Gallery of Kenyon College, Gambier, OH.

Luis Camnitzer (Uruguayan, b. Germany 1937) is a prolific artist, theorist, and educator. He occupies a prominent place in the history of Latin American Conceptualism. His writings, projects, and educational treatises challenge convention and confront institutional power, economic injustice, and political repression. Camnitzer’s practice springs from a relentless curiosity and the belief that art is a platform for organizing and acquiring new knowledge.

Serving as inspiration for the exhibition, the site-specific installation, The Museum is a School will grace the exterior of our building. Displayed at over twenty museums around the world, the project’s origin stems from Camnitzer’s disagreement with a museum director. While working as a pedagogical curator, he and a team of educators developed an interactive learning station. After reviewing the team’s ideas, the director nixed their plans and said, “This is a museum, not a school.” Soon after, Camnitzer submitted his resignation by sending the director a photoshopped image of the museum’s facade emblazoned with the words, “The Museum is a school; The Artist learns to communicate; The Public learns to make connections.” With elegant simplicity, Camnitzer’s words upend expected hierarchies and reimagine the museum as a forum for an equal exchange of ideas.

The exhibition brings together several works that underscore Camnitzer’s commitment to the concept of art thinking. Designed to stimulate free association and dialog, the Assignment Books are creative propositions that require interactive engagement to become complete works of art. The installation El Aula (The Classroom) speaks directly to the often tenuous line between education and indoctrination. Timelanguage and Symmetrical Jails reflect Camnitzer’s ongoing engagement with experimental printmaking and the limitations of language.

Confronting real and imagined borders, Territorio Libre (Free Territory) invites contemplation of the  barriers societies, institutions, and individuals impose. In a darkened room, razor wire surrounds the words  “territorio libre” projected onto the floor. Viewers witness the piece as outsiders unable to physically enter the space. Separated from the outside world, the protected free territory becomes an unexpected trap and prison.

With serious intent and a biting wit, Camnitzer offers viewers a chance to think, reflect, and learn.