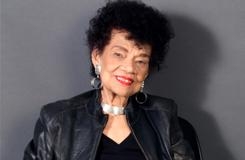 Talk: "Lorraine O’Grady: Ask Me Anything About Aging," in conjunction with the exhibition Simone Leigh: The Waiting Room, at the New Museum, NY.

Fielding questions about aging, O'Grady will consider the benefits of intergenerational word-of-mouth information and strategy-sharing among women.

O’Grady first identified as an artist when she was in her forties, making her first public artwork in 1980 after previous careers as an intelligence analyst for the US government, a literature translator, and a rock critic. O’Grady’s performance Mlle Bourgeoise Noire (1980–83) has long been considered a landmark of identity-based institutional critique, and widespread recognition of her importance as a Conceptual artist has grown over the last decade. Often employing her own autobiography to consider black female subjectivities and identity construction within the social and political structures of art and the world at large, O’Grady brings sharp focus to the experience of aging.