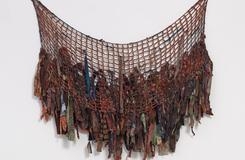 Boston Center for the Arts (BCA) presents Queer Threads: Crafting Identity and Community/, featuring 26 artists from four continents who remix fiber and textile craft traditions and materials to explore contemporary lesbian, gay, bisexual, transgender and queer identities and ideas. Loaded with gender connotations, feminist herstories and tactile experiences, the featured works utilize handicraft—including crochet, embroidery, knitting, macramé, quilting and sewing—as a platform for examining tastes, roles and relationships socialized within and around gay and lesbian culture, as well as the bodies, cultures and spaces that shape us.

With works that date from as early as 1955 to as recent as 2016, this international, intergenerational mix of artists position the evolution of personal desires and public identities within the history of domestic crafts and fiber arts. Many of the works are fully executed using traditional fiber craft techniques while others deconstruct traditional craft processes and repurpose found materials and craft supplies.