In 1964 after moving to New York from his native Uruguay, Camnitzer co-founded The New York Graphic Workshop with fellow artists Argentine Liliana Porter and Venezuelan José Guillermo Castillo. Until 1970, they examined the conceptual meaning behind printmaking, and sought to test and expand the definition of the medium. In 1964, Camnitzer wrote a manifesto on printmaking that was adopted by the group as a statement of intent. In this text, Camnitzer argues that printmaking should not restrict but amplify the artist’s possibilities of generating conceptually rich ideas through strong images. This concept would dominate Camnitzer’s artistic practice through the later part of the 1960s and well into the 1970s. During this time, Camnitzer developed a body of work that explored language as a primary medium. He found that “the verbal description of a visual situation could elicit the creativity of the spectator in a better way than the visual situation itself.” In The Disappearance of…, an engraved brass plaque conveys a certain level of gravitas, which is contrasted by the wordplay of the following incomplete statement: “the disappearance of.” Through Camnitzer's explicit omission, the viewer is encouraged to superimpose their own interpretive guess for the missing word. This work points to the possibility of multiple meanings of a single object or phrase suggesting how reality can be defined by ambiguity. It also suggests Camnitzer's engagement with legacies of Latin American dictatorships during the 1960s and 70s, the "desaparecidos," and other atrocities committed by authoritarian regimes. Other important works by Camnitzer like Uruguayan Torture Series (1983–1984) and Memorial (2009) address similar themes. 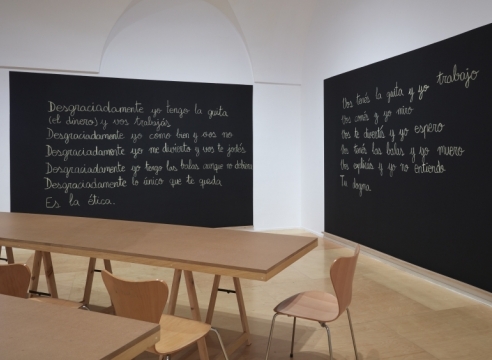