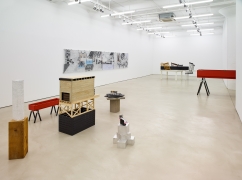 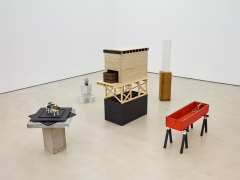 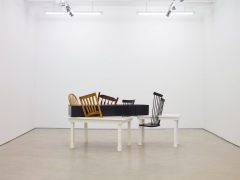 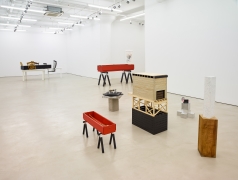 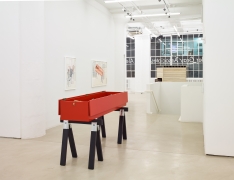 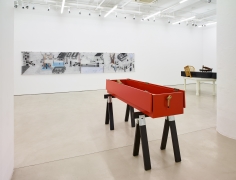 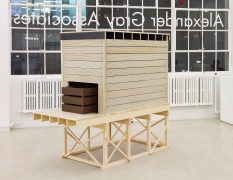 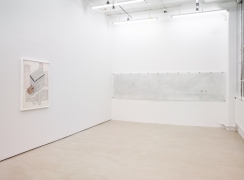 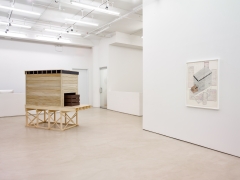 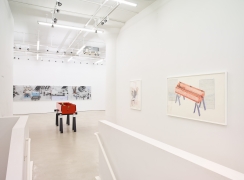 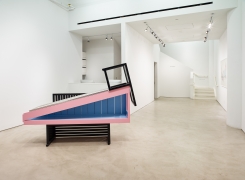 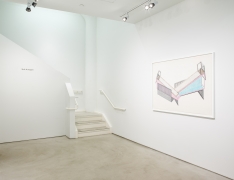 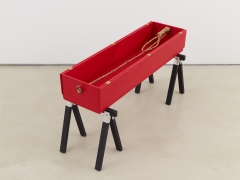 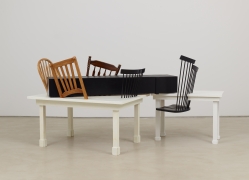 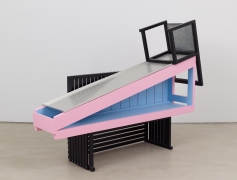 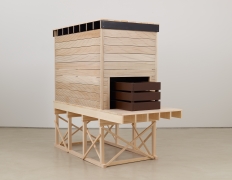 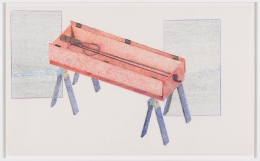 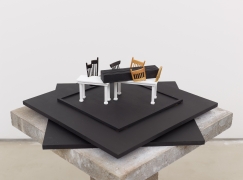 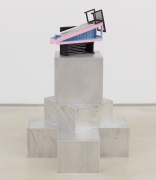 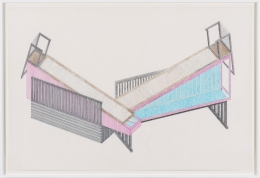 Alexander Gray Associates presented drawings, models, and sculptures by Siah Armajani from his ongoing “Tomb Series” (1972–2016). The Series pays tribute to philosophers, activists, poets, and writers who have informed and inspired Armajani’s art and ideology. This was the second exhibition of his Tombs at the Gallery, and the group of works on view highlighted his interest in the way these cultural figures influence one another in life, death, and output.

The exhibition showcased Armajani’s drawings, sculptures and models, all of which are discrete elements rather than tools in service of a single realized Tomb. The variety of media he uses speaks to the democratic nature of his practice; the sculptural elements are built, the drawings made, but within his oeuvre neither process holds more significance than the other. In some cases drawings or models serve as the Tombs’ final conceptualized forms.

In his large-scale calligraphic drawing 100 and One Dead Poets (2016), Armajani honors poets across geographies and generations. The artist created this 14-foot drawing by recording excerpts from poems by each of these figures, and then meticulously covering the inscriptions with correction fluid. He describes the resulting surface as a “retinal experience.” The drawing is an abstract composition of text embedded with small representational elements that function as vignettes; for example one notices a small rendering of a pear, a common motif in his earliest calligraphic work dating from the late 1950s while he was still living in his native Iran. Also included in the exhibition was the 16-foot drawing of the cityscape of Tehran, Written Iran (2015–16). As with 100 and One Dead Poets, the drawing is formally composed of written language, but here Armajani uses Farsi poetry, much of which he memorized as a child, to structure representational and architectural elements. Armajani pays tribute to a selection of seminal poets, especially Nima Yushij, considered to be the predecessor of modern Persian poetry.
Sculptures and models in the exhibition include Tomb for Richard Rorty (2016), a modular composition that incorporates elements of vernacular American architecture in honor of the American pragmatist philosopher. Tomb for Frank O’Hara (2016) celebrates the free-association style of the American poet and curator whose work poet John Ashberry describes as having “shatter[ed] the congealed surface of contemporary academic poetry.” The pastel pink and blue painted surface of Tomb for Arthur Rimbaud (2016) refers to descriptions taken directly from the French poet’s work.

Of note is Tomb for Dietrich Bonhoeffer (2016), through which Armajani pays tribute to the German theologian who the artist explains “rose up to kill Evil Itself, and was hung for it” under the Nazi regime in 1945. In a departure from all of the other tombs he has created up to this point, Tomb for Dietrich Bonhoeffer includes an allusion to the man’s manner of dying; a noose which is pulled tightly across the top of the tomb itself. Through this compositional element Armajani communicates Bonhoeffer’s status as a martyr and identifies the pastor’s death as a defining moment of his life and legacy. 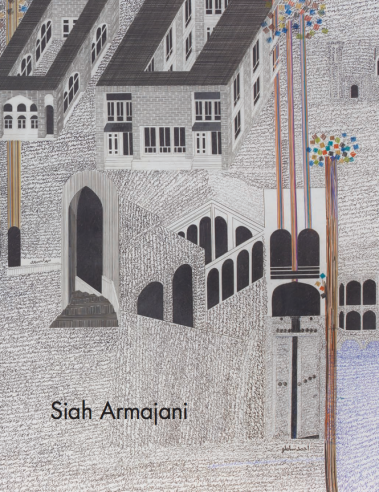