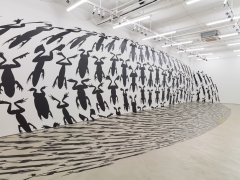 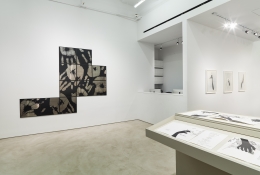 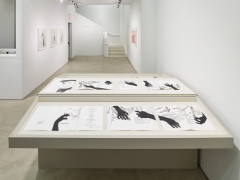 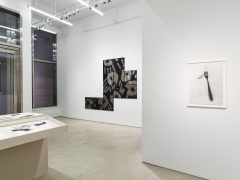 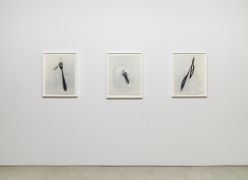 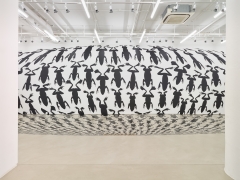 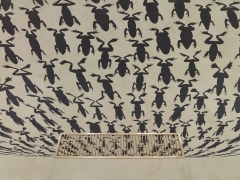 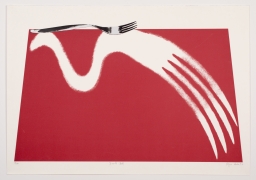 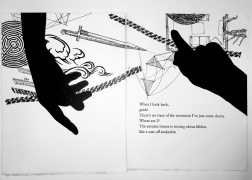 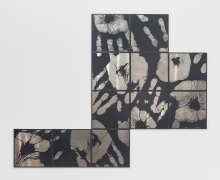 Alexander Gray Associates presented an exhibition of work by multimedia artist Regina Silveira.  The works on view emphasize Silveira’s use of graphic visual language through accumulation and skewed perspective to transform our perception of spaces. Throughout more than four decades, Silveira, a critical figure  in Brazilian conceptual art, has investigated the tension between movement and spatial perspective, threading political meaning into installations that respond to specific sites.

Featured in the exhibition is the room-size mixed media installation, Amphibia (2013/16). This large scale immersive work covers the walls and floor of the Gallery’s second level with oversized silhouettes of frogs flowing toward a gilded metal grate in the center of the floor. The placement of frogs, notably one of the biblical plagues, de-familiarizes the Gallery space, employing allegory to evoke contemporary social and political concerns.  For curator Paulo Miyada, “the woes that afflicted ancient Egypt might be compared in the context of Regina Silveira’s work, to the current ills of corruption, war, and surveillance.”

Silveira’s large scale vinyl installations are informed by her study of printmaking techniques, which provide what she considers a “dry syntax that eschew[s] autographic aspects,” and allow for the reproduction, re-scaling and distortion of photographic images. In Touch (2016), the artist employs traditional engraving to explore “ideas of absence, the marks reveal an event that took place in time,” in this case a hand reaching out and imprinting it’s image on metal. Silveira imbues this seemingly quotidian shape with mystery and fantasy by producing larger than life handprints, resulting in phantasmagorias and visual enigmas.

Silveira’s most recent photoetchings, the Voodoo Series (2015) further question the reality of occurrence and the nature of representation. These images rely on Silveira’s longstanding interest in skiagraphia (the study of shadows) as well as the transformation of ordinary objects into potentially threatening tools. Images of forks, screws, and scissors appear to pierce the paper on which they are reproduced, to cast shadows that render a three dimensional quality to the printed image.

Over the course of four decades, advances in digital technology have enabled Silveira to expand her investigations into experimental printmaking to materialize in three dimension projects that she has envisioned since the early 1980s. Her use of media ranging from paper to immersive environments serve as sites to consistently transform perception through minimal intervention. Her transgressive visual language is defined  by what she describes as “images with characteristics of aggregation and accumulation, with the power to cover surfaces and to function as graphic invasions or contaminations, which could radically transform the meanings  of the…spaces where they were placed.” 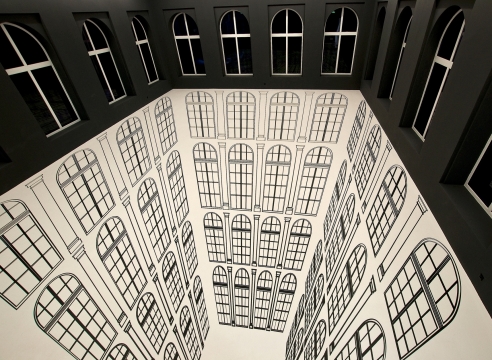 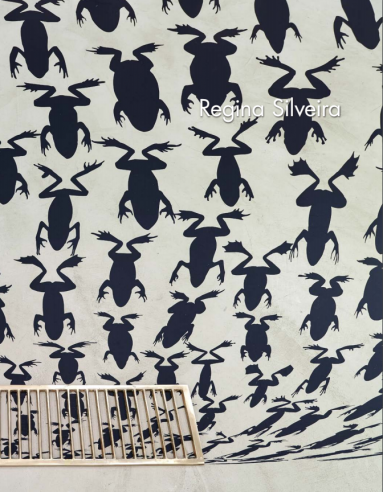