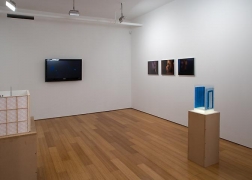 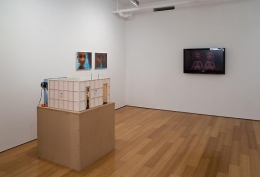 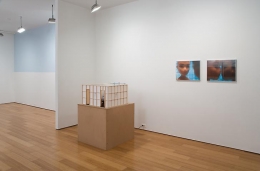 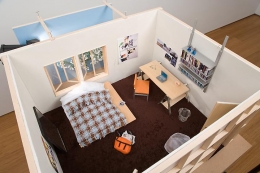 Alexander Gray Associates artist Bruce Yonemoto selected Bryan Jackson, a filmmaker, theater director and artist whose work have been celebrated on the Gay and Lesbian Film circuit. Jackson’s film, Softly, a highly stylized short film that traces desire, sensuality and romance is the centerpiece of his exhibition. In this film, Bratz dolls have been employed as actors in a romantic narrative between two men. By staging them in miniature, exquisitely handcrafted sets, the line between dollhouse and reality becomes blurred—creating a world as fragile and ephemeral as the romance story that takes place within the frame. On exhibit were two of the sets, presented as sculptures, and still photographs from the film. Making reference to Todd Haynes’ landmark 1987 film Superstar: The Karen Carpenter Story, and Douglas Sirk films of the 1950s, Softly embraces sentimentality and humor, queer iconography and fetish.