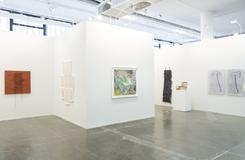 Together, Hassan Sharif, Harmony Hammond, and Melvin Edwards utilize found materials to expand a modernist art tradition and invite cultural and historical context into abstraction. Hassan Sharif sourced materials, such as copper, from construction sites and local markets in his native Dubai and transformed  them into abstract sculptures such as Car Parking (2015). Sharif sees a palpable relationship between craft, materials, and narratives, drawing on the bedouin tradition of weaving and alluding to the industrial expansion and modernization of the United Arab Emirates. Similarly, Harmony Hammond employs strips of canvas, grommets, and oil paint to build up the near-monochromatic surfaces of her canvases, a process which she calls “material engagement.” In Lace I (2012), the artist utilizes the grommeted straps and rope to literally lace-up the center of the canvas, while also referencing the material used in women’s fabric arts. Also on view are three works from Melvin Edwards’ “Lynch Fragment” series, welded steel wall reliefs detailing the artist’s interest in sourced and found materials. Edwards’ use of agricultural and industrial objects, such as horseshoes and railroad spikes, are chosen for their formal qualities but they also convey to the viewer a narrative as well as a sense of place. In Palmares (1988), the artist references the Brazilian colony occupied by runaway slaves in the seventeenth century, honoring the one-hundred year anniversary of the emancipation of slaves in Brazil.

Both Sergei Eisenstein and Luis Camnitzer employ narrative in this presentation. Sergei Eisenstein’s drawings depict sexual imagery to construct succinct and transgressive visual stories in a medium that was intentionally less public-facing than his films. In Pintura con titulos (1973), Luis Camnitzer develops multiple narratives, painting the canvas in an Abstract Expressionist style but presenting multiple titles for the work such as “Windblown Field in Autumn” or “Dilapidated House (Possibly My Grandparents’).” Humorously jabbing at modernism and formalist abstraction’s attempt to negate content from art, Camnitzer demonstrates that the artworks meaning can be whichever that is assigned to it.

Also on view are several of Camnitzer’s etchings from his time at the New York Graphic Workshop (1964–1970). In Espejismo (1970), the artist explores both tautology and topology, altering the viewer’s perception  of the word to create a literal mirage. Similarly, Regina Silveira utilizes distortion and skiagraphia, the study  of shadows, to transform ordinary tools. In the series entitled “Tramada,” meaning hatching, Silveira references the works’ intricate sets of intersecting lines, an allusion to the history of Brazilian design and architecture.

Repertório
The Gallery’s participation in the the Repertório sector curated by Jacopo Crivelli Visconti includes an installation by Luis Camnitzer, The Shift of the Center of the Earth (1975). The work presents a brass plumb bob, a tool used by builders and engineers to determine vertical alignment, that is installed to skew its string  at an angle, creating the illusion of suspension. By repositioning the plumb, the viewer is disoriented, presenting an alternate reality wherein the laws of physics are upended. While the center of the Earth is presented as an authoritative, scientific fact, Camnitzer invites the viewer to shift their perceived relationship  to this untouchable location. Formally, the work demonstrates Camnitzer’s economy of scale when raising broad questions with limited material or language. The installation is emblematic of the artist's practice, including his ongoing questions of cultural perspective and individual agency relative to geographical, cultural and political borders.

During the event, local museums and cultural institutions host a strong parallel program that includes panel discussions, exhibition openings, and special visits that offer an overview of the contemporary art circuit. SP-Arte is an essential component of the latinamerican art landscape, and is positioned as a rallying point of the arts, that also strengthens and supports the country’s creative economy.