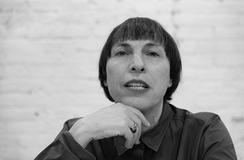 Alexander Gray Associates is pleased to announce representation of Polly Apfelbaum (b.1955), with the Gallery’s first exhibition of her work opening September 2017. Apfelbaum’s (b.1955) artistic practice is distinguished by a hybridized aesthetic that fuses traditions of painting, craft, and installation. Deploying a wide variety of media—including fabric, paint, dyes, wallpaper, plasticine, and ceramics—her work has dissolved spatial, plastic, and temporal boundaries. She is best known for expansive polychromatic installations, which coalesce the radical and the beautiful, simultaneously domestic and irreverent. Her sensibility is informed by an encyclopedic knowledge of the applied arts, fine art history, and popular culture.

Active since the mid-1980s, Apfelbaum’s practice is notable for her use of found materials associated with craft traditions to create sculptural objects and sprawling, floor-based installations. She has referenced the aesthetics and principles of the Italian Arte Povera movement, French Supports/Surface movement, and First-Wave Feminist art, utilizing accumulation and dispersal as her preferred tools for installations.

Her material choices are often associated with craft and women’s work, including dyed fabric, shredded paper, felt, and crepe paper streamers. Connecting the process and the materials is a determined injection of vibrant and improvisational color, reflecting her passion for Twentieth Century design and painting. With awareness of how her floor-based installations draw from classic traditions of fine art, Apfelbaum defines staining and dyeing as an act of painting; cutting, a way of drawing in space; and assembling the cut pieces a sculptural practice.

In recent years, she has expanded the site specificity of her work in order to create immersive environments that continue her interest in the cultural aspects of color and multi-sensory experience. In 2014 she created For the Love of Gene Davis, which encased a room in vibrant striped rugs and artist-designed wallpaper in homage to the Color Field painter’s 1972 landmark outdoor painting, Franklin’s Foothpath. In such ambitious architectural interventions, Apfelbaum occupies and transforms entire spaces with correlated objects including painted walls, wallpaper, ceramic wall plaques, hand-woven rugs, and intimately scaled and suspended ceramic beads. She has also created sound installations incorporating ceramic instruments, often utilizing her ‘shape notes,’ as in The Sound of Ceramics (2016).

Apfelbaum’s artwork titles are vital and evocative, pointing to a wide range of influences, including: music, film, literature, and mass media; philosophy and politics; art history and architecture. It is both through these references, and through her use of recognizable craft materials that she places cultural and social content into her formal abstractions. Her piece Splendor in the Grass, Glory in the Flower (1994), an assemblage of small white crushed velvet squares each imprinted with a colored dot and arranged in large rectangle on the floor, owes its title both to an excerpt of the William Wordsworth poem, “Ode: Intimations of Immortality,” completed in 1804, and Splendor in the Grass a 1961 film starring Natalie Wood and Warren Beaty.