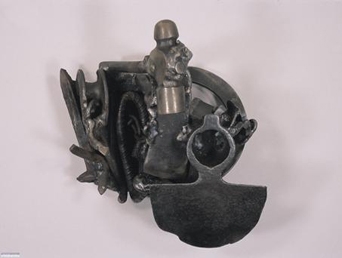 Melvin Edwards is included in the group exhibition Art of Protest, at the Fralin Museum of Art, University of Virginia

Art of Protest highlights the ways in which artists have both documented and participated in the protests of the 20th century. Whether these protests were carried out in the streets or represented in subversive works of art, the objects displayed in this show reflect the struggle towards equality that characterized the mid-twentieth century. This exhibition displays photography featuring dynamic compositions of pivotal moments in time, including work by Danny Lyon, Ed Roseberry, and Andy Warhol. Alongside these images of bodies in protest, the exhibition also displays objects that demonstrate artistic activism. This includes a pop-up book by Kara Walker and a sculpture by Melvin Edwards that both respond to America’s exploitation of enslaved labor. These objects merge visual expression with political activism, suggesting that art should confront viewers and inspire change. Through the comparison of documentary photographs and three-dimensional objects, the exhibition illuminates the role of art and artists in protest.