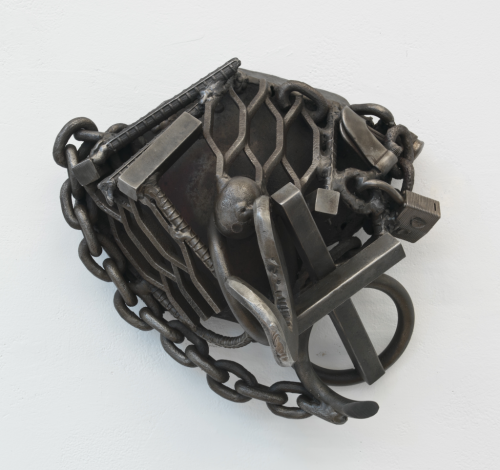 Solidary & Solitary: The Joyner/Giuffrida Collection, offers a new perspective on the critical contribution African American and African diaspora artists have made to the evolution of visual art from the 1940s through to the present moment. Co-organized by The Baltimore Museum of Art and the Ogden Museum of Southern Art in New Orleans, Solidary & Solitary traces a movement beginning in the mid-twentieth century with Abstract Expressionist Norman Lewis through to some of the most celebrated artists working today including Glenn Ligon, Lynette Yiadom-Boayke, and Mark Bradford. Curated by noted art historians Christopher Bedford and Katy Siegel, Solidary & Solitary is the first large-scale public exhibition to bring together this vital lineage of visionary artists.

Ranging across 70 years, Solidary & Solitary reveals a rich and complex history woven from the threads of artistic debates about how to act as a Black artist. Told in a series of solos and duets, the exhibition plays on the tension between the “solitary”—being specifically, uniquely and only oneself—and the “solidary” of collective social identity. Placing a spotlight on individuals’ pursuit of creative freedom in different eras and geographical contexts, the exhibition features several artists’ careers in depth, including Norman Lewis, Sam Gilliam, Charles Gaines, and Lynette Yiadom-Boakye. The duets emphasize artistic affinity and resonance, often across generations, in pairings that include Melvin Edwards’s Lynch Fragments in dialogue with Leonardo Drew’s recent monumental wall sculptures, as well as large-scale paintings by Jack Whitten paintings together with the work of Mark Bradford.

Drawing on the Joyner/Giuffrida collection’s unparalleled holdings, a central theme of the exhibition is the power of abstract art as a profound political choice, rather than a stylistic preference for generations of African American artists. The exhibition will demonstrate how the freedoms of postwar abstraction took on specific urgency in resisting the imagery of racist mainstream culture on the one hand, and pressures to create prescribed, positive representations of black Americans on the other, in order to create new forms that proposed new ways of being. Highlights include large-scale works by artists that fuse the social and the abstract in visceral ways, including Kevin Beasley, Shinique Smith, and Serge Alain Nitegeka, among others.

Solidary & Solitary commenced at the Ogden Museum of Southern Art in New Orleans in September 2017, and will tour to venues across the United States including The Nasher Museum of Art at Duke University; the Snite Museum of Art at the University of Notre Dame; University of California Berkeley Art Museum and Pacific Film Archive (BAMPFA); and The Baltimore Museum of Art, which will present an expanded version with additional new commissions.

The Solidary & Solitary tour is made possible with the support of The Joyner/Giuffrida Collection and is supported by presenting sponsor The Helis Foundation, a private Louisiana foundation committed to advancing access to the arts.

A companion publication, Four Generations: The Joyner/Giuffrida Collectionof Abstract Art, is published by Gregory R. Miller & Co., and edited by Courtney J. Martin, Deputy Director and Chief Curator at the Dia Foundation, featuring new research and writing from curators at some of the world’s leading institutions.