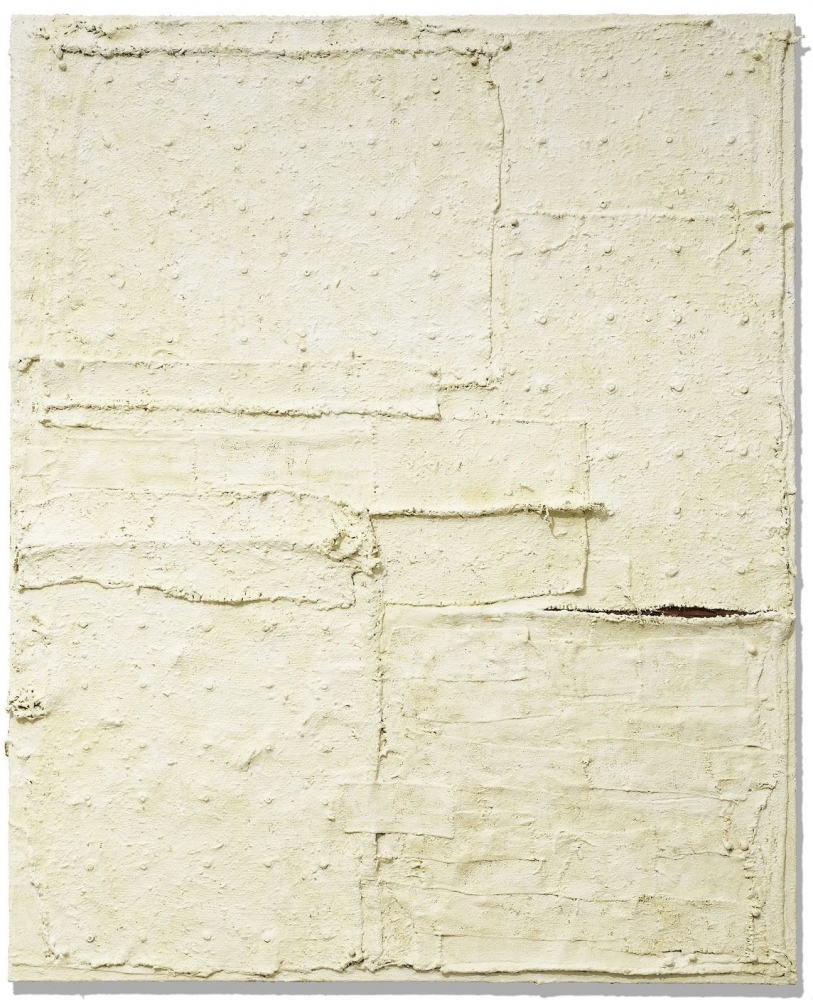 Susanne Vielmetter Los Angeles Projects is pleased to announce an exhibition of new paintings by Harmony Hammond. Continuing Hammond’s decades-long engagement with materials and process to suggest content, the paintings in this exhibition come from two recent bodies of work: Bandaged Grids and Chenilles.

Bandaged Grid #7 represents a transitional moment from minimal near-monochrome paintings of grids, while the off-white Chenille paintings, which incorporate rough burlap and grommets into Hammond’s signature layers of thick paint, suggest the soft texture and domestic warmth of cozy bedspreads. Chenille experts, like quilters, share an undervalued history of needlework and similar technique of puncturing fabric from the backside.

In Hammond’s pieced and layered paintings, the chenille reference is visual – performed by paint and other materials on the surface of the canvas, rather than the puncture of a needle and thread. The seams are important. There is a moment, in Bandaged Grid #7, where two edges meet as a highly articulated seam split open, disrupting the grid and the whiteness…a deep red is visible from some space inside the painting body. An orifice? A wound? A voice? An internal life? Color has agency: Refusing to be buried, it asserts itself from underneath and from behind. Deep browns and reds emerge through holes, at the seams, or cracks in the surface, at times bleeding into the paint to suggest the potential disruption of the warm white coverlet.

Based in Galisteo, NM since 1984, Hammond was a leading figure in the early days of the feminist art movement in New York in the 1970’s. She was a co-founder of A.I.R. (the first women’s cooperative gallery in New York) and of the quarterly Heresies: A Feminist Publication on Art and Politics. She curated numerous exhibitions and has lectured and published extensively on feminist, lesbian and queer art and the representation of difference. Her first book, Wrappings: Essays on Feminism, Art and the Martial Arts (1984) is considered a classic discussion on 70’s feminist art and her second book, the groundbreaking, award-winning Lesbian Art in America: A Contemporary History (2000), seventeen years later, remains the primary text on the subject.