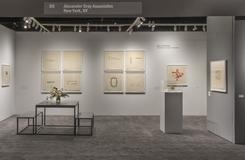 Alexander Gray Associates presented a curated selection of graphic works by Luis Camnitzer (b.1937), produced during his time with The New York Graphic Workshop (1964–1970). The art that Camnitzer generated during these years was groundbreaking as he expanded the traditional definition of printmaking and began incorporating language as his primary medium. The selection of works on view embodies the ideas Camnitzer developed during a key historical moment when conceptual artistic experiments were flourishing around the world and in his case would cement his practice and position him as a leading figure in 1960s Conceptualism.

Shortly after arriving to New York in 1964 from his native Uruguay on a Guggenheim Fellowship, Camnitzer co-founded The New York Graphic Workshop along with fellow artists Argentinian Liliana Porter and Venezuelan José Guillermo Castillo (1941–1999). Together, they sought to expand the definition of printmaking, focusing on its potential to become a conceptual repetitive act rather than a tool for creating precious objects generally associated with images derived from painting. The group served as a meeting place for a variety of international artists arriving to New York in the mid 1960s, and at its core a space where the three members were able to articulate individual languages that would define their artistic visions. At the onset of the group’s formation, Camnitzer penned an influential manifesto in 1969 entitled “New York Graphic Workshop : Luis Camnitzer, José Guillermo Castillo, Liliana Porter” outlining that printmaking, as a commonly perceived subordinate to painting and sculpture, was ripe for conceptual exploration. As he stated, “Industry prints on bottles, boxes, electronic circuits, etc. Printmakers produce their work using the same means that Dürer used in his time.” In this way, Camnitzer asserted that printmaking should evolve with the world’s rapidly changing culture and not restrict but rather amplify the possibilities of an artist to generate conceptually rich ideas through strong images.

Through these innovations, Camnitzer, who is also a prolific writer, fully embraced the malleability of words in more than one language to explore issues of perception, tautology, and politics, a defining quality that would be central to his practice of over more than four decades. In his words, “if a picture is worth a thousand words, then a word can conjure a thousand pictures.” In works such as Shift (1968) and Garden Wall Door Table (1968) Camnitzer stripped away the traditional aspects of printmaking to incorporate ideas associated with Minimalism, serial structures, and art actions. He found that “the verbal description of a visual situation could elicit the creativity of the spectator in a better way than the visual situation itself.” Additionally, Camnitzer explores written language and the manipulation of spatial relationships, in the sculpture Topological Change of a Sentence (1966). The artist has stenciled the title of the work onto the side of a stack of index cards that have been glued together. The cards are stacked asymmetrically, creating undulating edges that can be read as a type of topography. The title of this sculpture becomes its physicality. For Camnitzer, “re-imagining our thought processes” embodies the intersection between art and life.