Alexander Gray Associates presented Neither Here Nor There, Valeska Soares' first exhibition with the Gallery. The artist, who has lived and worked in Brooklyn since 1992, has maintained deep connections to her native Brazil while positioning herself in New York’s multi-faceted art scene. With the works on view in the exhibition, Soares re-interpreted the neutral gallery spaces as domestic zones, affirming Alexander Gray Associates as a new home for her work in her adopted city.

On view on the ground floor were four paintings from her Doubleface series. In these works, Soares modifies vintage portraits of women to suggest the allure and mystery triggered by covered objects. The artist re-stretches the sourced canvases, painting the verso in a monochrome selected from the palette of the original painting. She then cuts and folds over a piece of the assembled oil painting to reveal the portion of the original portrait that she finds most evocative, thus disrupting a small fragment of the monochromatic plane. Through her restoration and appropriation of portraits of anonymous women, she rescues the sitters from obscurity; through her monochromatic intervention, she emphasizes the dichotomy of figuration and abstraction. These paintings are shown in tandem with her rugs from her ongoing series Ground, which are similarly cut, folded, and painted. These works draw on historic connotations of carpets as objects of religious practice, decorations, and non-monetary currency in numerous cultures. Together, these objects conjure a personal living room, or familial gathering space; however their monochrome modifications make them simultaneously universal and anonymous. Together, these bodies of work also upturn Modernist paintings’ formal explorations of figure and ground, color field and representation.

In the Gallery’s large second-floor space, Soares created a variant on her iconic large-scale installation, Finale (2013), in which she amasses domestic objects into an environment that evokes fictional narratives and recalls memories. Epilogue(2017), expands this signature work, in both scale and intention, and is comprised of five antique tables in a variety of styles, each with a mirrored surface that she tops with a surfeit of mismatched antique cups, filled to varying degrees with spirits. The work, which appears to be a dining room at the end of some unknown and unknowable celebration, underscores the participatory impulse throughout Soares’ oeuvre. Mirroring a party scenario in which one invites guests into their home, making the private public, Soares captures the private moments after a celebration ends, when the space remains charged by the memories and traces of a fleeting moment and space; in this way, the viewer provides a narrative for this mis en scene. As curator Jens Hoffmann describes, “just as there is no way for visitors to know what joyful event is being capped off with a toast, there is no way for them to know their absent drinking companions. The incomplete scenario is a challenge: to invent memories in place of lacunae, or to hang out in the blank spaces, acknowledging that there’s more to be gained by leaving things unsettled.” 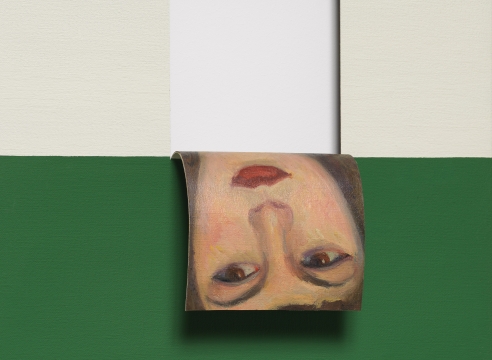